LONDON (ICIS)–Ukraine should pay more for EU-sourced gas if it is short due to the rerouting of transit to Nord Stream 2, rather than buy volumes directly from Russia, the head of the Association Gas Traders of Ukraine told ICIS.

The pending completion of the Russian pipeline via the Baltic Sea to Germany could create a shortage of anything between 10-46 billion cubic metres/year once the historical transit is diverted away from Ukraine in central and eastern Europe – or even more in case of peak consumption.

The deficit could be caused by capacity constraints along the route as flows would be reversed from Germany into the CEE region, as well as possible supply shortages as Russian producer Gazprom may not ship more volumes than what European customers have already contracted.

This means Ukraine could be in a particularly difficult position as it would seek to source volumes in a tight CEE market.

An alternative would be to buy volumes directly from Russia.

Nevertheless, Andrii Myzovets, chair of Association Gas Traders of Ukraine, said such an option should never be considered as Ukraine lost more than 10,000 people and over 20,000 were injured in an ongoing war with Russia since 2014.

“I am 1000% sure that we should never buy gas from Russia even if we had to pay twice for gas sourced on European markets,” Myzovets said, acknowledging that European hub prices are currently at record highs, trading above €50.00/MWh.

Ukraine stopped direct Russian off-takes in 2015, shortly after the war in Donbas and Russia’s annexation of Crimea, opting instead to source volumes from neighbouring European markets.

The first test will be this winter. Ukraine’s incumbent and storage operator Naftogaz said it aimed to have 20bcm in stock by the start of the heating season.

However, Myzovets says between 5-6bcm would be technical volumes which would have to be kept in storage, while the remaining quantities may not be entirely held just by Naftogaz.

“The question is what will these [private] companies do? Will they sell the gas held in customs warehouse regime to the local market or will they re-export it to European markets?” he said, adding that more gas should be injected in storage.

There is currently 18.2bcm in storage, of which 3.3bcm are held by non-resident companies in customs warehouse, a regime which allows companies to hold imported gas without customs clearance for three years. 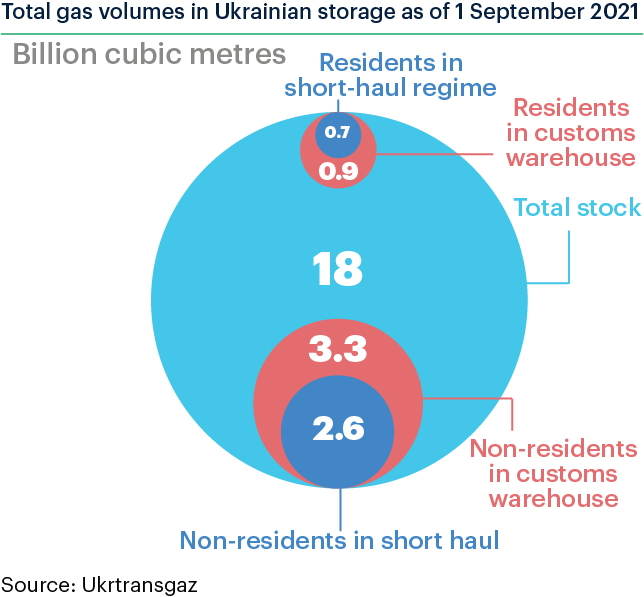 Myzovets said grid operator GTSO should work together with distribution companies to test the infrastructure in case of transit disruptions.

“An important part of our industrial consumers is in the south and south-eastern [Black Sea] regions.

“Will these companies receive gas if transit is discontinued? GTSO and distribution companies should work along such scenarios which are very real.”

Myzovets said testing and optimising the infrastructure to ensure all customers have access to supplies once the transit is rerouted was of paramount importance.

In the long term, Ukraine should work to increase domestic production as well as seek to secure LNG cargoes via Poland and Croatia and import it as gas through the Polish and Hungarian transmission systems.

However, he pointed out that as long as Ukraine continues to subsidise prices to households and heating companies it would not be able to invest money in upstream projects.

Ukraine has one of Europe’s largest oil and gas reserves, but local production has plateaued at around 20bcm annually in recent years.

Tariffs to households and heating companies have been capped below Ukraine hryvnia (UAH) 9,000/kscm (€26.65/MWh) until May 2022 even though spot prices are now more than double that value.

“How can you invest in production if you do not get a return on volumes sold to end consumers? The government should grant incentives only to vulnerable consumers. It is wrong to subsidise prices to households which can afford paying for it.

“Subsidies are killing our gas production,” he added.

Myzovets said Ukraine should continue reforming its market as a guarantee to attract much-needed investment.

He admitted, however, that carrying out reform would be very difficult because there is no certainty regarding the long-term or even short-term direction of the market.

“How can we discuss real markets when we do not even know where we are heading in the next few months? As traders we are ready to operate at short-term notice but this is not the case for the transmission system operator or producers [which require long-term contracts].”

Myzovets warned the current record spike in European hub prices as well as the rerouting of the Ukrainian transit to Nord Stream 2 would raise problems not only for Ukraine but also for Germany as the recipient of Nord Stream 2 volumes and Europe as a whole.

“Germany intends to become Europe’s biggest gas hub. But how can you be so confident when most of your gas will come from one source, which happens to be Russia? A hub means having multiple and diverse sources of supply, not an overwhelming reliance on one producer only. 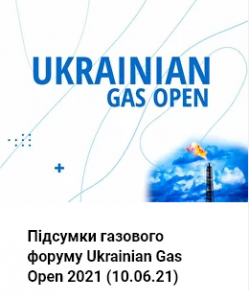